Born in the village of Musmus near Umm El Fahm in 1981, Agbaria is a fine arts graduate and an award winning student. He attained a bachelor’s degree from Bezalel Academy, Jerusalem in 2004 and a master’s degree from Haifa University in 2014.Since completing his undergraduate degree, Agbaria has painted prolifically often experimenting with different styles, techniques and media including charcoal, oil, acrylic and lithography. His catalogue of work to date has dealt with many themes associated with the Palestinian narrative, identity and memory. He has participated in over 20 group exhibitions and has held three solo shows.

Historically, cacti have been planted as borders for protection around plots of land and houses. That function, however, has transcended the plant, making it a sacred icon. The resilient sturdy plant has been transformed into a symbol for memory, whereby time has stopped blocking the road of forgetfulness. It is a tactile testimony of an attachment to a precious place, hence an assertion of belonging and identity. The classic Palestinian symbol of the cactus is central to Agbaria’s work. Agbaria packs together the leaves of the cacti in an intense repetitive manner. His thick brushstrokes and rich colors carry the cactus to an abstract representation that parallels the metaphor of resistance. Agrabia ‘s work cover a repertoire of post impressionist paintings that tackle attachment to the land and Palestinian identity.

“I am not divorced from the reality around me
When I am painting my country, villages, hills, all of my works have political intent.
In reality I am painting the wars , the wall  the occupation.” 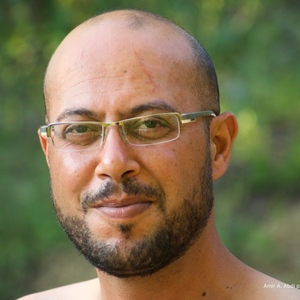